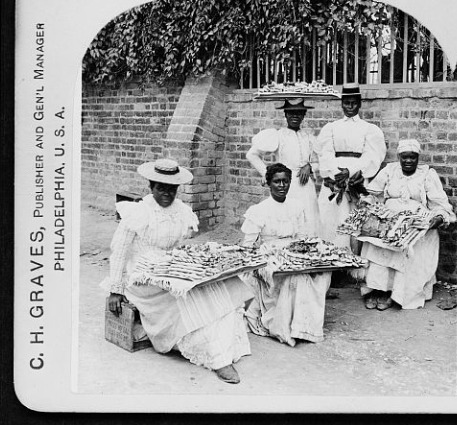 According to national archives of the United Kingdom, between 1662 and 1807 Britain estimates to have shipped over 3 million Africans across the Atlantic Ocean and were forcibly brought to British owned colonies in the Caribbean. It was not until 1834 that these slaves were emancipated.

Although the emancipation legally freed slaves, social and economic systems needed for the overall welfare of the formerly enslaved did not exist. Because most of the available work originated from the very plantations in which they were freed, many freed slaves turned instead to the emerging informal food market of street vending. Relying on the wealth of the colonizers and their families, as well as the culinary void that slaves once filled, Jamaican women infused the streets with their culinary goods.

In the above photo, dated 1899, we see a group of Jamaican women selling desserts along the street in Kingston, Jamaica. After hundreds of years of slavery, along with the European absorption and elimination of Jamaican values and aesthetic, many Jamaicans were forced to conform to European cultural standards and practices. Capitalism and fashion followed suit.

During the pre-emancipation period, female slaves were often relegated to a standard white cotton gown as clothing. Post-slavery, newly freed slaves perceived clothing as tangible object that could possibly upgrade their social status and appear “presentable” to European community. Among the five Jamaican vendors in the above photo, the differences between the two women sitting on the far right and the other three women can be observed through their headwear, high collared dresses, and structured sleeves and skirts.

Despite the emancipation of slaves in 1834 and the assumed equality among the island’s inhabitants, Jamaicans lived under Britain rule until declaring independence in 1962.

← Why Make Bammy Cakes When You Can Buy Them?
The Global South: The Linchpin of Cassava Production →
Jamaican Culture & Colonial Influence