A Brief History of the Bammy: Sustenance

The Jamaican Bammy - also known as Bammy Cake, Baked Cassava, or Cassava Cake, depending on its usage - is a flatbread made from grated and pressed Cassava Root (also known as Yuca or Manioc). Its history dates back to pre-Colombian times when it was eaten by Jamaica's original inhabitants, the Arawaks. (For more information, see Jamaican Bammy Cakes: Indigenous Food or Cultural Commodity?)

As is the case with many breads, it is labor intensive to make (see graphic below). However, because of its ability to keep, the Bammy became of a staple provision for indigenous peoples. 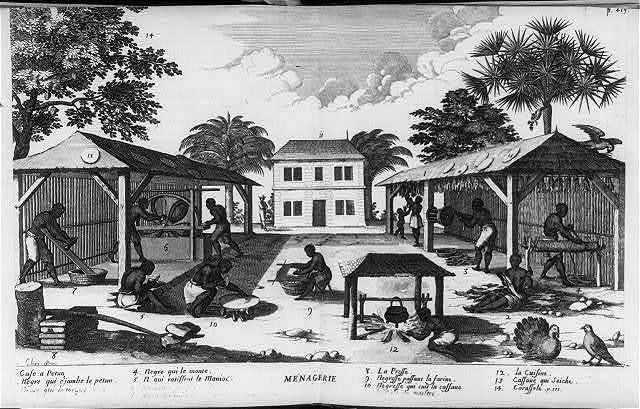 Yuca (also known as manioc and cassava) is a root vegetable indigenous to the Caribbean and that has served as a staple of Caribbean diets since long before Columbus’s arrival. However, cassava - unlike some other provisions also indigenous to the Caribbean,  such as the pumpkin and the sweet potato - when eaten raw, can be poisonous (see graphic below). As such, it required alteration to be consumed safely.

The poisonous nature of the raw root vegatable lead to two primary alterations: the processing of cassava flour (for more information, see The Roots of Cassava Flour), and the creation of the grated, peeled, and fried bammy cake.

During times of European colonization, when the indigenous peoples of Jamaica and the Caribbean were oppressed and enslaved along with slaves brought from Africa, cassava was a primary source of sustenance.

The timeline on the following page outlines several historical examples of the Bammy/Cassava Cake being used as sustenance.