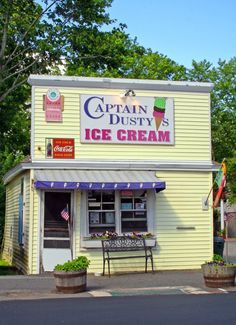 Captain Dusty's Ice Cream is located at 143 Derby street, Salem, MA. It is opened March to Novemeber from 12pm to 8pm everyday. There are other locations in Massachuesetts, these are Manchester and Beverly. 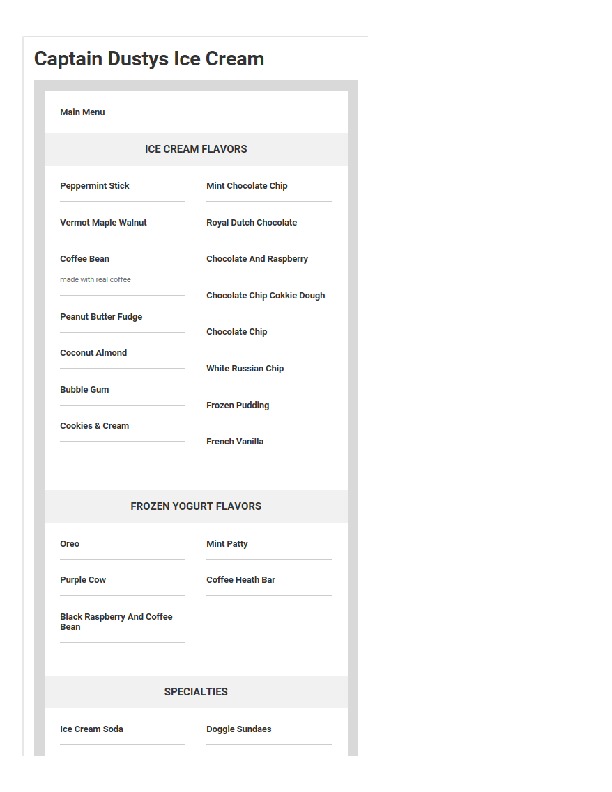 Captain Dusty's does not have a physical copy of a menu, but they do have one online and on display right when you walk into the shop. Unfourtunatly, there are no prices on the online menu and not all the seasonal options are there, for example, they have Pumpkin ice cream and their special for halloween, Witches brew. Their seasonal options are listed on the menu displayed on the shops wall, right when you walk in.

Structure of the Menu

The menu is broken up into catergories of "Ice Cream Flavors", "Frozen Yogurt", and "specialties"(in order). "Specialties" include, Sundaes, Floats, Ice cream sodas, Freezes, Banana Splits, "Doggie Sundaes" for your dogs, and Frappes. Captain Dusty's has some fancy, catchy names for some of their ice creams. Based on Wickedlocal.com, for the Halloween and Autumn season they have "Witches Brew", For everyday flavors, for "Frozen Yogurt" they have a something called "Purple Cow", which is Black raspberry ice cream with white and dark chocolate chips.

There are a total of two boards on display, on the wall above the counter, contained with all the delicious ice cream flavors that they are serving. Each on of those boards has five categories each. The menu on display, has more options then the menu that is available online. The display menu has a wide variety of flavors and options from regular ice cream to sugar free, and lactose free.

For those of you who do not know what the difference is between an ice cream soda, a float, and frappe, a float is used with flavored sodas like Coco-Cola, Sprite, Root Beer, etc. ice cream is added so it floats. An ice cream soda, on the other hand, is typically made with soda water or seltzer, ice cream and different flavors of syrup, occassionally milk or cream is added. A frappe is completely different from an ice cream soda and a float. Frappes are coffee or tea based. Coffee or tea is mixed together with milk, sugar, and ice to form a frothy drink. In the New England area Frappes are actually milkshakes. According to Livestrong.com, "In and around Boston, a frappe is a milkshake, rather than a coffee drink." A milkshake is made with ice cream, millk and flavorings, for example, strawbery and chocolate. Since Captain Dusty's Ice Cream is Massachusetts based, and the names and flavorings for their frappes, the frappes are most likely milkshakes. Some of their frappe flavors are:

A lot of the items on the menu have catchy names. Majority of these names are for their ice cream slection, with the exception of "Purple Cow" for frozen yogurt and "Mudslide" for a frappe selection. Some of the ice cream flavors are common names, for example, "rocky Road" and "mudslide." The names are not unique at all, in fact there are recipes online to make that certain flavor of ice cream, frozen yougurt, frappe or ice cream soda. The only thing that is unique is what "Witches Brew" contains and what it is. "Witches Brew" is typically served as a punch or ice cream soda. What makes this "Witches Brew" unique is that it is served as an ice cream, which consists of chocolate ice cream with chocolate covered expresso beans, Twix bars, peanut butter cups, almonds and chocolate chips. They most likey have an ice cream called "Witches Brew" because of the famous Salem Witch Trials. This is probably mostly for tourist attraction. Captain Dusty's has a lot of "normal" flavors, as well, to serve a wider range of customers, as some people may not like crazy flavors like "Ginger", "Butternut Crunch", and "Frozen Pudding." Just to name their "normal" flavors, they serve:

Captain Dusty's also serves something called freezes. Freezes are, essentially, a New England term for slushies. They also have coladas, which are very similar but more liquidity, and typically made with fruit. These options include:

Captain Dusty's is averaged price and is very similar to other ice cream shops around Salem.