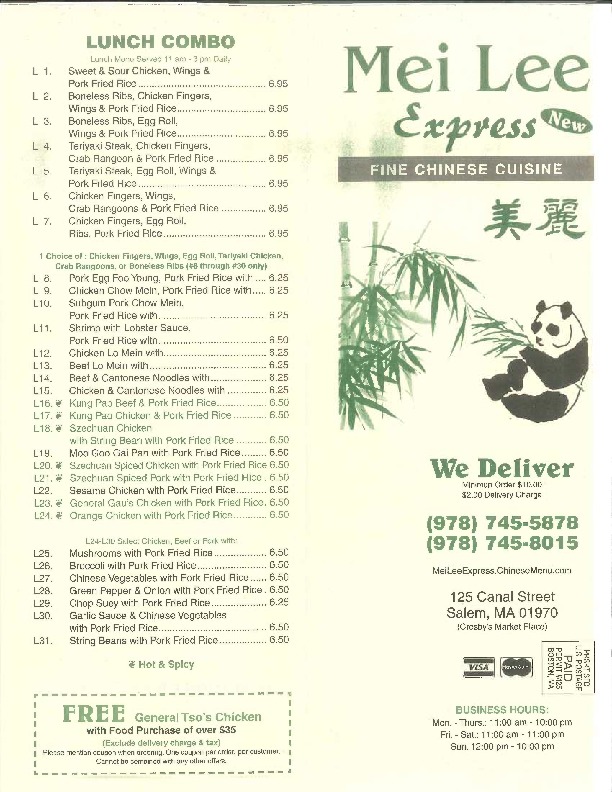 Mei Lee Express is a Chinese restaurant currently located at 125 Canal Street in the same plaza as Crosby’s Marketplace (a local grocery store) in Salem, MA.  Until 2012, there was a different Chinese restaurant at this location, called “Happy House”, before it came under new management and was renamed “Mei Lee Express”.  Although there is little information available about the restaurant itself online, the menu itself is on several websites, such as this one, (http://meileeexpress.chinesemenu.com/), allowing the customer to order online.  It is one of several Chinese restaurants in Salem; others include Salem Lowe, Hong Kong King, Fantasy Island, and Salem Jade Restaurant.  Mei Lee Express offers delivery, take out, and dine in options, although there is no outdoor seating or catering available.  Customers do not have to make reservations and they will accept credit cards, such as Visa and Master Card. The items on the menu are fairly reasonably priced, leaning a little towards the expensive side.  The restaurant has garnered fairly positive reviews, with a 3.9 out of 5 on Google Reviews and a 3 out of 5 on Yelp.  Mei Lee Express’s hours are Mon-Thurs: 11 A.M. – 10 P.M., Fri-Sat: 11 A.M. – 11 P.M., and Sunday 12 P.M. – 10 P.M.

The menu begins with traditional Chinese appetizers, including egg rolls, spring rolls, crab rangoons, and a pu pu platter.  The appetizers section also includes more traditionally American food, like French fries, as well as several types of fried seafood, which are a common meal in the North Shore area.  Mei Lee Express likely offers these items in order to appeal to a greater audience, especially the tourists who visit Salem and may want to eat New England fried seafood, even in a Chinese restaurant.  The menu offers many other sections of Chinese cuisine, such as several types of soup and fried rice, chop suey or chow mein, lo mein, chow foon or rice noodles, and meat (pork, chicken, or beef).  These sections all include different varieties of the listed item, such as with different types of meats, vegetables, or sauces.  There is also a section for sandwiches: chop suey, pepper steak, and tender steak.  This seems to be another way to appeal to a wider audience, and the chop suey sandwich is especially interesting, as it combines Chinese chop suey with American sandwiches to create something unique.  The menu also includes the house specialties, which have interesting names, such as “Dragon and Phoenix”, which is described as “two dishes in one: shrimp with Chinese vegetables and General Tso’s Chicken.” According to Elaine Chow, the Chinese cultural significance of this name is: “Dragon & Phoenix is a popular way to refer to a powerful match between two strong entities. It’s a great symbol for marriages, or when you have twins that are a boy and a girl” (https://www.quora.com/What-is-the-Chinese-food-dish-Dragon-and-Phoenix).

The menu includes a statement that all entries are cooked in vegetable oil, and spicy dishes include a warning, in order to help with the dietary needs and safety of customers.  The menu does not use much marketing language, only occasionally stating things like “succulent shrimp” or “selected vegetables”. The most interesting aspect of this menu is that although it is a Chinese restaurant with mainly Chinese dishes, there is also some cuisine from other parts of Asia included as well.  For example, there is an entire section for Pad Thai (chicken, vegetable, shrimp or beef), which comes from Thailand.  There is also a dish called “Singapore Rice Noodles”, which must come from Singapore.  The Singapore noddle dish also includes curry, which despite being eaten in many Asian cultures, including China, is actually native to India.  Mei Lee Express’s menu also includes multiple items (beef, chicken, etc.) cooked using the teriyaki method, which is a Japanese method of cooking. This practice of offering some pan-Asian cuisine is common in Asian-American restaurants, particularly when they are catering to non-Asian customers.