Founded in 1961, (or maybe it only gained fame in that year, having existed longer but only feeling that its existence since the 60's had enough merit to mention on the menu) Dube's seafood offers medium priced meals and some unusual extras. Dube’s offers all the staples of New England seafood (clams, oysters, shrimp, and sea fish such as haddock or swordfish) with one glaring omission- no lobster! Since there were restaurants in the olden days of Salem dining that hinged their image on the fact they had lobsters, Dube’s lack of lobster seems odd. Another oddity is their offer of New York style sirloin steak. While a variety of palates and societal pressures (just look at the bottom of the menu’s list of disclaimers and advisories, both unheard of in the days of yore) have made many restaurants diversify their offerings by necessity, it’s a little unusual to see steak served at a seafood place before lobster. While Surf and turf is a popular combination, this one steak listing is also the only cow-based item on its menu (discounting dairy products.) Another thing to note about Dube’s is the emphasis on fried foods-all sides are fried, and six of the items on the regular menu are explicitly fried, the platters will often have fried components. 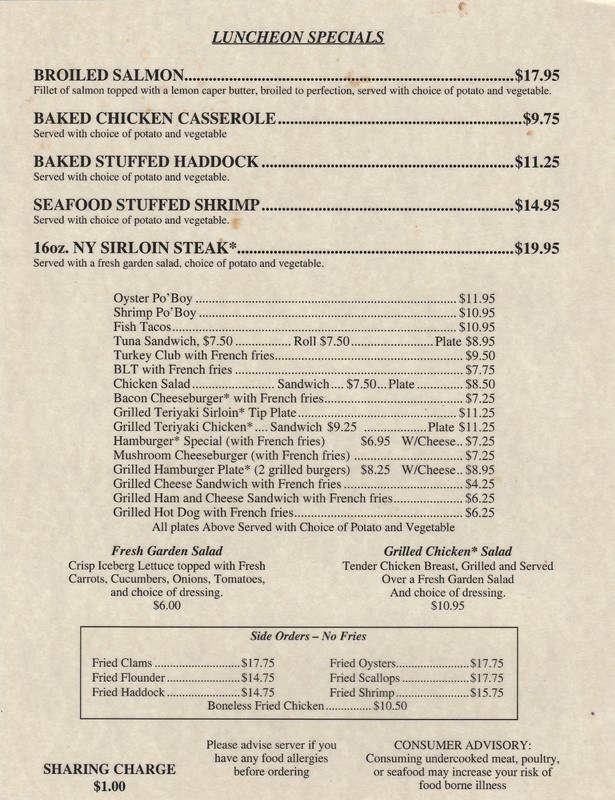 Another of Dube’s edible oddities (at least to this provincial author!) is the listings for an oyster and shrimp variety of something called a Po’boy. Looking it up, a po’boy is a type of seafood sandwich served on a baguette, originating from New Orleans (Or more properly in this case, N’Orleans) I suppose that New Orleans is located on the Eastern coast, but  it is not the sort of East Coast seafood I would expect to find in Salem. Coupled with the aforementioned NY Sirloin Steak, Maybe I mislabeled Dube’s as a New England seafood place, and it is in fact a restaurant dedicated to celebrating the entire Eastern Seaboard. 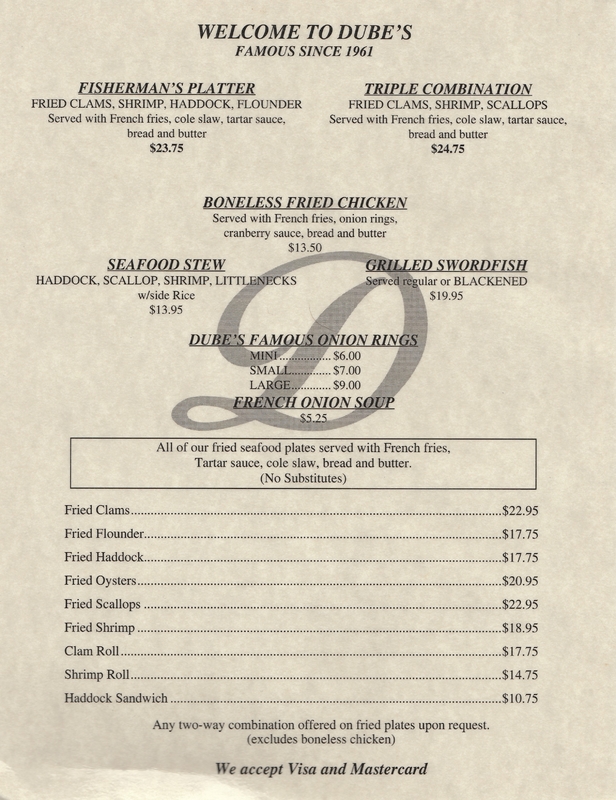 The menu styling at Dube’s is quite utilitarian. While the paper is an off beige, not quite the regular printer paper color, and there is a “D” for the logo designed in a flourishing typeface, the menu is otherwise unembellished. Food is presented in a logical but typical manner, the five specials displayed in the front as separate little paragraphs, while the rest of the menu is in simple list format. There is no explaination for most foods, beyond listing some ingredients. Other than some evocative names (Teriyaki Chicken and the NY Steak and Po’boys I’d touched on earlier) there is only one real case of color and marketing in the food names- Dube’s famous onion rings, situated front and center in front of the logo. Something unusual about the menu is the number of asterisks in front of certain items, like the New York Steak and Grilled Chicken Salad. I’ve looked numerous times over my scans and the original, and have not been able to find a key to explain these asterisks. I really have no guesses for this- A box on the front of the menu says that they do not do substitutions for their meals, so it is not like the asterisks represent a meal that must be served in a specific way. the only thing I feel confident to say is I bet any consternation I feel about this is matched by the serving staff’s need to explain it to every canny patron.

Reviews of Dube’s are generally positive, one notable example comes from Ralph P’s review on Tripadvisor.com, which remarks that Dube’s seafood Restaurant is “where the locals go!” Other reviews remark on the amount of fried food on the menu, and the generous portion sizes. Personally, I suspect this owes more to the restaurant’s location on 317 Jefferson Ave than anything else. Notable neighbors include a couple residential houses, a bridge for car traffic, and little foot traffic. Dube’s is practically in the sticks when you consider the 16 restaurants/bars/cafes that scattershot the center of Salem, including competing seafood joints like the Lobster Shanty, Turner Seafood, and the Koto grill and sushi restaurant. While Dube’s is fairly close to the nearby Salem State University (making it a useful establishment for this writer’s purposes) college students are not a group particularly renowned for their appreciation of cozy seafood dinners. From what I've read, $20 isn't unreasonable for food like this, but it's not very viable if you have no or negative income.

While this is a display about a lunch menu, Dube's seafood does have a bar, which is fitting given the restaurant’s penchant for fried food in large quantities. Heads up for vegetarians, there is only the usual side-dish salad available, and possibly some sandwich options, although this would be a bit difficult, as while the menu has a section of sandwiches/ sandwich analogs, it does not label them as such. Since Dube’s is a small and local affair (This author suspects the restaurant used to be someone’s place of residence that was converted to an eatery, based on the building shape, layout, location, and lighting situation) it is not surprising that it has few options for vegetarians, as it does not have the pressure to cater to everyone like a chain or prominent restaurant might. Many non-religious vegetarians cheat for fish anyway, so…

A bit of miscellanea, but Dube's dubs itself famous since the 60's, and a famous landmark of Salem, much like Ebsen's seafood restaurant did in the 30's. Whether this was a clever nod by the founder of Dube's to the older restaurant, recycled marketing, or the most likely option of total coincidence is unknown to me.