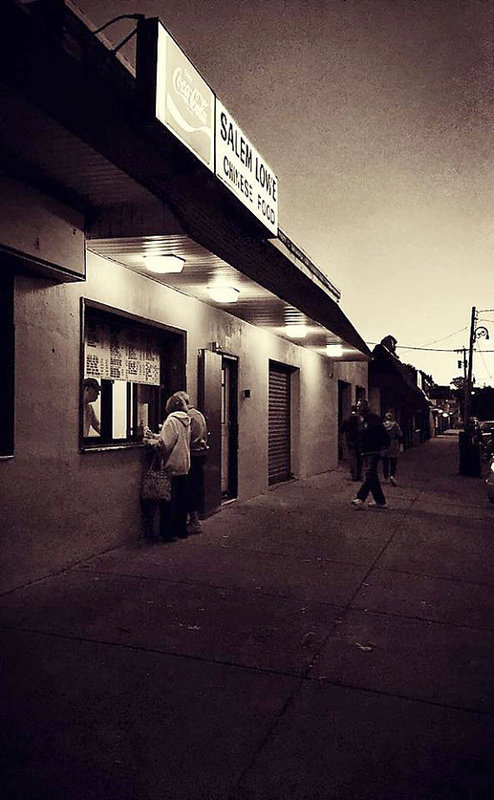 Salem Massachusetts has a long history with China starting mainly with the Old China Trade. The old china trade took place after the American Revolutionary War (1783) and continued up until 1844 with the Treaty of Wanghsia*. A positive impact of the trade includes the start of East Asia and United States relations. Salem provided a sea port in the old china trade due to them in 1790 being the sixth largest city in the entire country. Even after the trading had stopped Salem left important impacts on the East Indies. This is shown through Salem’s adoption of their city seal in 1939 which when translated states "To the rich East Indies until the last lap.”

Immigration had a large impact on the westernization of traditional chinese dishes. Around 1840's a wave of chinese immigrants came to the United States for the gold rush and a large group settled particularly in San Fransico. In 1849 the first new chinese restraunt to open was called Macoa and Woosung and there after more and more chinese restaraunts were appearing. The birth of Chop Suey while not entirely confirmed many sources say it was born in San Fransico. One tale told is a story of miners who came into an unknown Chinese restraunt and refused to leve without being fed. While it was late and the owners were exhasuted they scraped pieces from old dishes in the kitchen to make an entirely new dish called "Shap Sui" which translated means "odds and ends". The miners were so impressed they continued to return and order "Shap Sui". Throughout the years this dish transformed and took off in the 1950's were just Chop Suey restraunts were starting to appear and by the 1960's Chop Suey was replaced by other more "authentic" chinese dishes. Although Chop Suey fell out of favor Salem Lowe continued to keep it in their menu throughout the years.

In 1840 Boston was hit with a wave of Chinese immigrants. This was considered to be one of the last waves of immigrants Boston was faced with ( first English, then Irish). The reason for picking Boston was because it had a farely large work force and the cost of living was cheaper than most cities. Immigration continued to grow which resulted in new immigration laws that allowed only Chinese men to come over, excluding women and children. Seeking a sense of community the Chinese immigrants created "Chinatown" that is still seen today. In the 1950's Chinese immigration began to increase again as the immigration restrictions were removed.

(A Tale of three Cities, http://www.museumofthecity.org/project/a-tale-of-three-cities/, May 1st 2017)

Immigrants Impact on Food and Culture

You maybe asking yourself whats the importance of the creation of China town and Chinese restraunts in correlation with immigration. Looking throughout histroy you will find the importance of sharing a meal transcends to every culture. Looking at Chinese immigration in Boston the Chinese immigrants created China town as a place to find community as well as safety within their own culture. Food is something that bonds our culture and keeps us comforted, food creates a culture. However, in needing to make money and appeal to an American audience the traditional Chinese food was adapted to suit the mixing of both culutres. For example Chinese culture is based on a group mentality rather than strictly the individual and this is seen in their food. This is  in part due to food sources in China not being plentiful, an individual in China does not eat their own dish they are a social culture where all the dishes brought to the table are being shared. You can see this in the 1912 Salem Lowe menu underneath the food theres a section about how to split meals. This has also been adapted throughout the years and the majaority of Chinese food places including current Salem Lowe menu has combination plates. This is one example of the two cultures combining around food.

(tiger Lionel, The Anthroplogy of Chinese Food, May 6th 2009

Bill of Fare Versus Menu

Salem Lowe is a restaurant that includes both traditional Chinese cuisine and American cuisine. The menu is separated by what country the food is from. There is a section for Chinese food and a separate section for American food. Its smaller is size with a harder cover and a paper inside. The date of the menu is between 1912-1914. I was able to find this out because instead of “menu” it states “bill of fare”. When doing research I found out that around the civil war, restaurants did not have menus. You were just served one meal. When menus were first created they used the phrase bill of fare up until the beginning of WW I which began in 1914 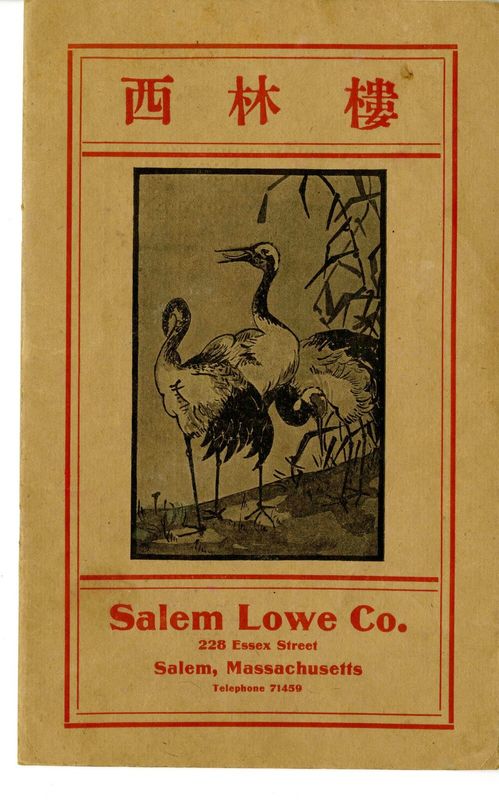 The 1912 Salem Lowe menu is small and rectangular. The front says Salem Lowe Co with the address down the bottom in red and the rest of the space is taken up by a picture of three cranes. The cranes do not appear as random as one thinks to be on the cover of a Chinese menu. In Chinese culture the crane is one of the most valued bird oftentimes appearinf on fabrics worn by emporers. The crane symbolizes longevity and peace and if you look into the Hisotry of Chinese art many paintings were devoted to cranes in various wooded backgrounds. The center crane has one leg up which symbolizes longevity, which is itting considering Salem Lowe has been around for more than a hundred years. Excluding the hard front and back cover the menu has three additional pages that are a page material and not hard plastic. The top of each page says "CHINESE BILL OF FARE" and the menu is seperated between Chop Suey, Chicken, Noodles, Omletes, Etc., Soups, Special Tea, Candies, Nuts and perserves.

The 2017 Salem Lowe menu is more square and no longer has a hard cover. Salem Lowe changed from a sit down restaraunt to a strictly take out restraunt. The menu is printed on pink paper the cover says Salem Lowe Inc the address and no picture.  The menu is seperated into appetizers, lo mein, fried rice, side order, chop suey, chow mein, chow yoke, sweet and sour, egg foo yong, and combination plates.

The 2017 menus says Salem Lowe Inc instead of Salem Lowe Co . The main difference between an incoperation and a compnay is that an incoperation is completely seperate(legally)  from the individuals who started it. Perhaps as Salem Lowe grew and as the origional owners in 1912 passed away they turned more into an incoperation than a company. There is no picture on the 2017 menu and it is an entirely paper menu. This is mostly due to Salem Lowe transforming into strictly take out rather than a sit down restaraunt. The 2017 menu is broken up into more options than the 1912 menu and the chop suey section is significantly smaller. It is only 1/4 of the page where as in the 1912 menu it takes up an entire page. This could be in part to chop suey loosing its popularity over the years.

The majority of the menu are back-vowel words. According to “Does This Name Make Me Sound Fat” back-vowel words indicate heaviness which is perfect for a food menu. The idea of going out to eat you want food thats going to fill you up so by having mostly back-vowel words it gives off the impression of being more heavy and satisfied. The few words that were front-vowel words which indicates thin and fragile were found on the Chinese bill of fare and not the American bill of fare. I think that can speak to how people not from America view Americans and their eating habits. This is especially interesting due to the owners being Chinese immigrants coming to America in 1912.

While there are many new categories and dishes added on to the menu throughout the year the language of the menu has not changed significantly. In both the 1912 menu and 2017 menu there are no descriptions of whats in the food. This can mostly be attributed to the price of this restraunt this is not a high end restraunt where the ingredients themselves need to justify the price of the meal. The only descriptive word found is in the 1912 menu whenever lobster is used it is paired with the word "fresh". Perhaps this is due to many Chinese restraunts using mostly crab and not lobster so they needed to get the point across that they are usuing real lobster and not imitation meat.