Tavern in the Square Salem 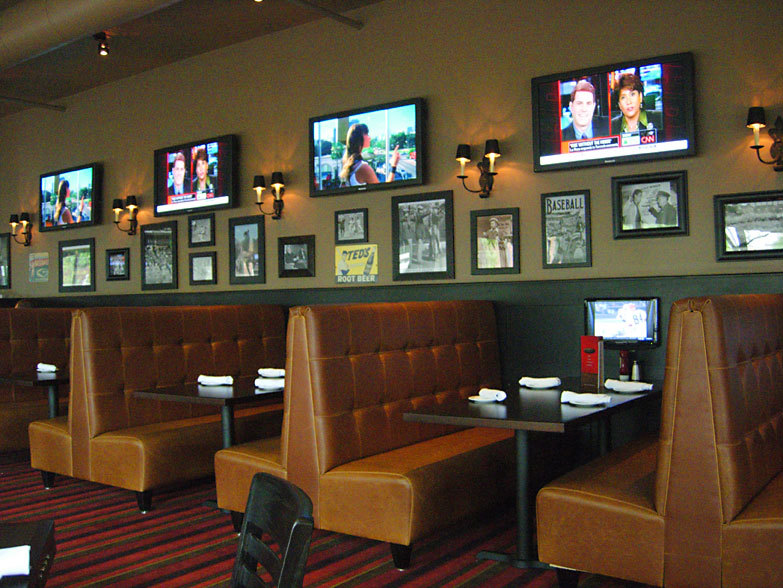 Tavern in the Square Salem is located in downtown Salem on Washington Street. It is a typical American restaurant/tavern. The restaurant is very sports oriented and has many New England sports team gear. There are many TV’s around the tables as well. The restaurant opened in 2009 and has since been voted the #1 Sports Bar on the North Shore by the North Shore Magazine for four years in a row. Many locals (and tourists) come here to watch big sports games. They also have events like trivia nights and live DJ’s. 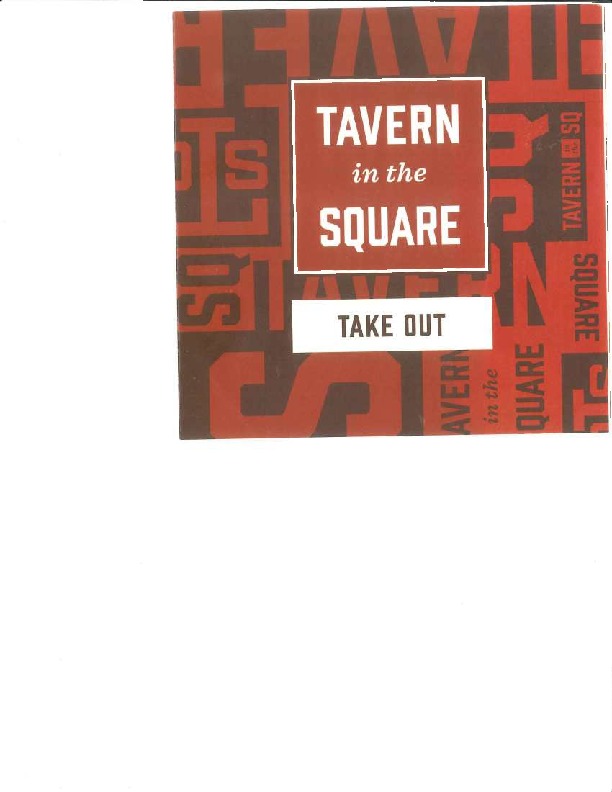 The menu itself is much like a typical American restaurant menu. The sections are: Starters, Soups, Salads, Sandwiches, Pizzas, Burgers, Square Meals, Sides, and Desserts. The smallest section is the Soups and the biggest section is the Sandwiches. The Starter section mostly has chips and other crunchy/hard food. For example, chips & dip, nachos, fritters, and fried pickles. Most of the "Square Meals" are food that is prepared warm.

Under each food listing, there is a small description of the meal below. It is very descriptive so you know exactly what you are ordering. The menu also has a “V” next to meals that are vegetarian and a “GF” next to meals that are gluten free. This makes it very easy for vegetarians and gluten-free people to find what they are able to eat. As for the item itself, the menu is red and is folded into many pages. It is easy to bring anywhere and convenient, being a take-out menu.

The food is very clearly described and listed. Some of the meals’ names refer to locations. For example, the Southwestern BLT, the New York Steak, Atlantic Haddock, and the Rhode Island Calamari. This goes to show they are well-rounded by having food that is from or inspired by other locations of the world. Putting the locations in front of the food grabs the readers/customers attention and makes the food sound more appealing and exciting.

Some of the location words are used to show that the food is inspired by another place. The Southwestern BLT is Southwest-inspired, as it has ingredients like chile and chiptole aioli. Southwest foods are known to be rustic style cooking and very similar to Mexican food. By reading "Southwestern" in front of "BLT", readers automatically know that the BLT will have a spicy touch to it. As for the New York Steak, this type of steak is cut from a certain part of the cow. It is cut from the short loin specifically. It is also normally called "Strip Steak". The words "New York", in this case, does not mean the meat is actually from New York. It is an adapted style.

Then, there are more self-explanatory location words that are only describing where the food is physically from. For example, the Atlantic Haddock. This simply means that the fish was from the Atlantic Ocean. However, it is significant because fish from different waters may look and taste different.

Some of the foods listed are very descriptive and others are not. I found that the "Margherita Pizza" had good description. It's listed as "fresh mozzarella, San Marzano tomatoes, basil, EVOO, parmesan". The first two ingredients listed stuck out to me the most because of the descriptive words like "fresh". San Marzano tomatoes are popular in pizza sauce and a lot of cooks like to use this tomato. Listing the type of tomatoes that are in the pizza showcased that the restaurant uses the preferred tomato. The ingredient "EVOO" is an abbrievation for Extra Virgin Olive Oil. The abbreviation is listed, instead of the full ingredient, because most people know what it stands for and do not need to read the full name.

The Firehouse Chili description is "Braised beef, chilies, tomato and beans, topped with Vermont cheddar & corn tortilla". Braised beef is beef that has been roasted in the oven and simmered in a sauce for several hours. Using the word "brasied" helps people understand the quality and consistency of the beef. "Vermont cheddar" Vermont cheddar cheese is a specific type of cheese, rather than just listing "cheddar". This may draw readers in because Vermont cheddar is different from other cheddar, it is said to be more sharp and have a stronger/better taste. The descriptive words used in the menu draw people to the food more.