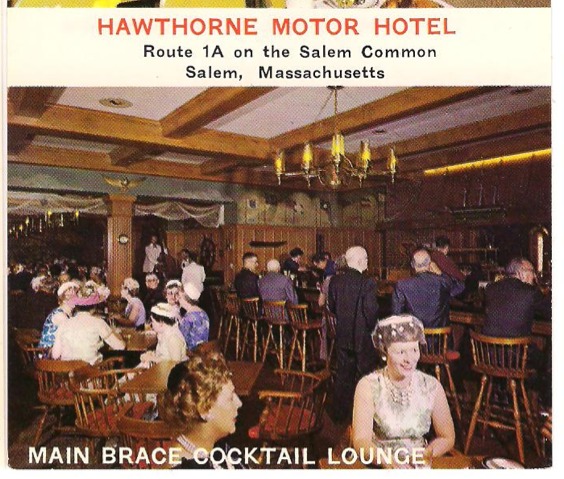 Nathaniel's restaurant is located in the Hawthorne Hotel. The hotel itself opened in 1925, and it is named after Nathaniel Hawthorne’s last name. He was an author, known for the Scarlet Letter, The House of the Seven Gables, and many more works. Hawthorne was also known for spending a lot of time in Salem, inspiring his writing. Although Nathaniel's did not open until years later after renovations, this restaurant is also named after Nathaniel Hawthorne’s first name. Upon opening in the last 15 years, Nathaniel's has since won many awards for its food and atmosphere. Nathaniel's was previously known as the Main Brace Cocktail Lounge, which was subsequently divided into two separate rooms, Nathaniel's and the Sophia room. The Sophia room is for private functions, and named after Hawthorne's wife. The once sailing-themed cocktail lounge, The Main Brace, would specialize in seafood and heavy dinner meals. But now, Nathaniel's in known for breakfast and it's diverse brunch menu. 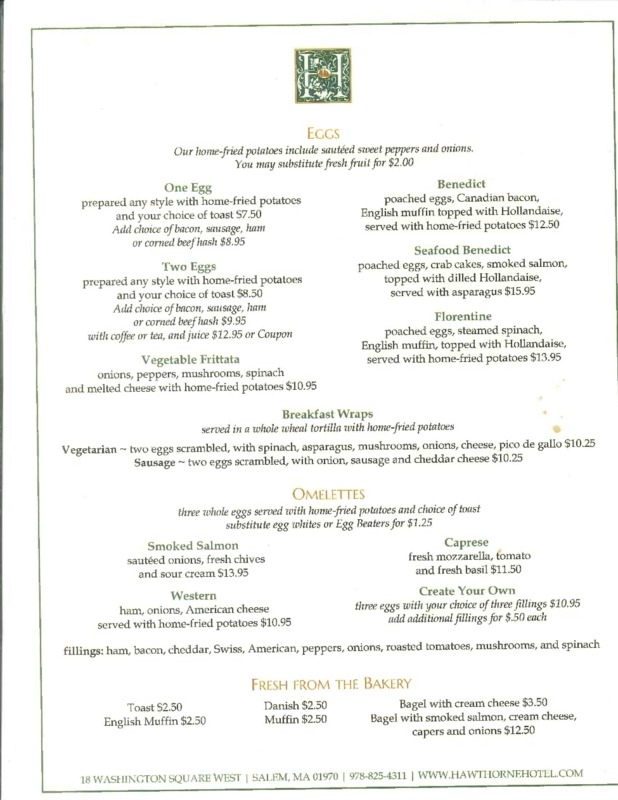 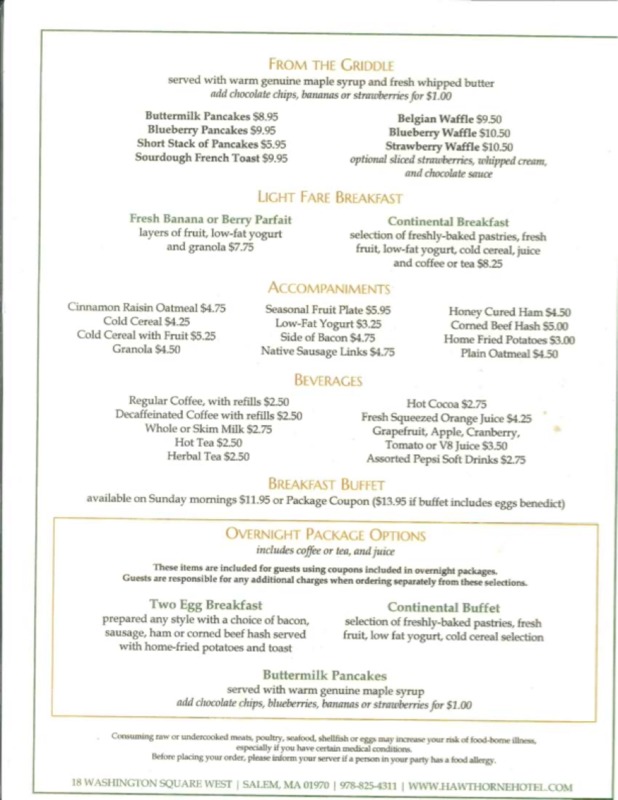 Nathaniel's is open for breakfast from 6:30am to 11:00am. It includes many common brunch specials, like a variety of benedict and omelette choices. There are only two items which contain seafood, the Seafood Benedict and the Smoked Salmon Omelette. These two options are also the most expensive items on the menu, pricing at $15.95 and $13.95, respectively. For a breakfast menu, there are no surprises or unique options, as the main items on here are as expected: eggs prepared different ways, mainly benedicts, the fancier and pricier option, or omelettes, the less exepensive options, and pancakes and waffles with a variety of toppings.

The term "fresh" in only used towards two categories of food throughout the menu: fruit and pastries. I believe fruit and pastries are sure to be described as fresh because both types of items are best when they are fresh. People will more likely desire them when they picture a "fresh fruit bowl", or as one whole category declares "Fresh From the Bakery". This category includes items such as muffins, danishes, bagels, and toast. For some people, there is a novelty of getting something fresh from a bakery. The wording for this category makes the items desirable, as the person is aware their food is fresh from the hand's of a baker. There are also other descriptive words to assure that this menu will appeal to as many people as possible. For example, "low fat, "light fare", "skim", and "decaffeinated" are also used to describe certain items and dishes like yogurt, milk, or coffee. This appeals to an audience who desires healthier or lighter options.

There is also another category's choice of wording that makes it stand out. As opposed to "sides", the menu uses "accompaniments". This is for items that are small, and most likely accompany a main dish. I believe this wording is a smart way to make this otherwise plain section appear more fancy. Perhaps the part of the menu that stands out the most is "Overnight Package Options". This section reminds the reader that this restaurant is located inside a hotel, as guests may order an overnight breakfast package such as eggs or pancakes. The keyword used in this section is "guests". Another reminder that Nathaniel’s is set in a hotel is the “Breakfast Buffet” option. Buffets are common for brunch, and especially common for hotel breakfasts. Seeing these specific categories and wordings makes Nathaniel's unique. Not only are people going out for breakfast to this restaurant, but guests staying in the Hawthorne Hotel access here, from their rooms, for breakfast.

What does this menu tell us about contemporary Salem?

The Nathaniel’s breakfast menu can tell the reader a lot about contemporary Salem, and even the United States. Although the ingredients for breakfast do not vary much for the main dishes, with the majority of these egg based, the preparation and additional ingredients provide information. Salem has a wide variety of restaurants, including so many different cultures and countries represented through these establishments. For example, one could drive around and see an array from Mexican and Southwestern food at the Howling Wolf to Asian inspired cuisine at Okea Grill and Sushi to Mediterranean styles at the Adriatic. Salem is just a micro example of how diversity in the United States hugely impacts and influences food and restaurants. Many people in the United States view going out to a restaurant as an opportunity to sample foods and flavors that differ from what they are used to.

Nathaniel’s is sure to appeal to customers by providing an array of different options which have been influenced by other cultures. For example, one item on the menu is a breakfast wrap. This item comes with eggs and a variety of vegetables, with pico de gallo, all in a tortilla. The breakfast wrap is influenced by Central American food, as both pico de gallo and tortillas originate from Mexico. The word “sauteed” is used on the menu, with an accent mark over the first “e”, when describing peppers and onions. Although this word was adopted and anglicized into English in the 17th century, the use of this word gives an unfamiliar appearance. Another example to exemplify diversity would be the Western omelette. Especially with Salem being on the East coast, using the term “Western” immediately makes the reader imagine a different place. The use of different words or ingredients from other places in the world creates an appeal to diversity. Customers desiring their own individual, unique experience, ones they can not simply have at home, enjoy restaurants such as Nathaniel’s that offer diverse options. This menu shows that Salem, as well as the whole United States, not only includes many cultures, but celebrates and infuses these cultures into everyday life.