The Lobster Shanty is located in downtown Salem, Mass. It's located right on the walkway that is always covered in artwork, paintings, and sidewalk paintings by Creative Salem. Creative Salem is a local group of artists. They also hold events, music, and good times at certain times of the week during certain hours. To either avoid these or join them check out their website that lists all of them to see if anything interests you. Lobstershantysalem.com/events/

Hours: Monday to Thursday 5 pm to 1 am

Friday to Sunday noon to 1 am

Restrictions: -They take no reservations

-They are a dive bar so after 11 pm, must be strictly 21 years or older (nightly)

-PS. They can hold up to 30 people currently at the moment. (Just a head up for big groups)

The Lobster Shanty shows lots of characteristics of a New England style restaurant. Especially because it sells tons of seafood options and is a seasonal restaurant open from April 1st all the way to Jan 15th as well as being a dive bar. Each new season brings a new menu and new items for them to try out. For the first couple of weeks, the menu is printed out on normal white pieces of printer paper so they can try out certain items to see what gets the order and what doesn't before making official menus for the season. By doing this, they can get a better grip on what customers want before making the item's official and to test out new drink or food item to see if it's worth keeping on the menu. The menu that is being shown for the Lobster Shanty is there Opening Week 2017 Seasonal Menu. At the top, it even states "We're still working out the kinks".

Some background surrounding the Lobster Shanty. They have been around for 3 decades or 30 years in the town of Salem. The owners are Diane Wolf aka "Mama Bear" and Lee Wolf or " Lee Majors". Diane graduated from Johnson & Wales university while Lee graduated from Rhode Island School of Design and now teaches also at Montserrat College of Art. Lee was the mastermind behind the logo for The Lobster Shanty which is pictured above and has been published in newspaper and magazines, for example, Bostonia Magazine, Rolling Stone, the Washington Post and some others. In the Summer of 2015, their lease for the year went up into a public bid which sparked a huge out lash from locals. Three business were all competing for space. Locals started an online petition which was signed by thousands to keep the Lobster Shanty where it is located. "In an email to the City Council, Driscoll wrote that the business has landed a five-year deal and 'would remain, with added protections for the city and investments in further upgrading this entry to Artists' Row'". After this email, Lobster Shanty got the good news of being able to stay and claim a five-year lease to space. Diane spoke,"'Instead of being just a tenant, we're working together to make some changes — and not thinking about just the Shanty, but the Row in general,'...'The dialogue we started already has been great". Daine and her team want to make artist row a nicer and better place and make her restaurant a huge name in Salem. Which in 2017, almost every local knows or has been to this spot. Diane has kept her word and doing great with everything. 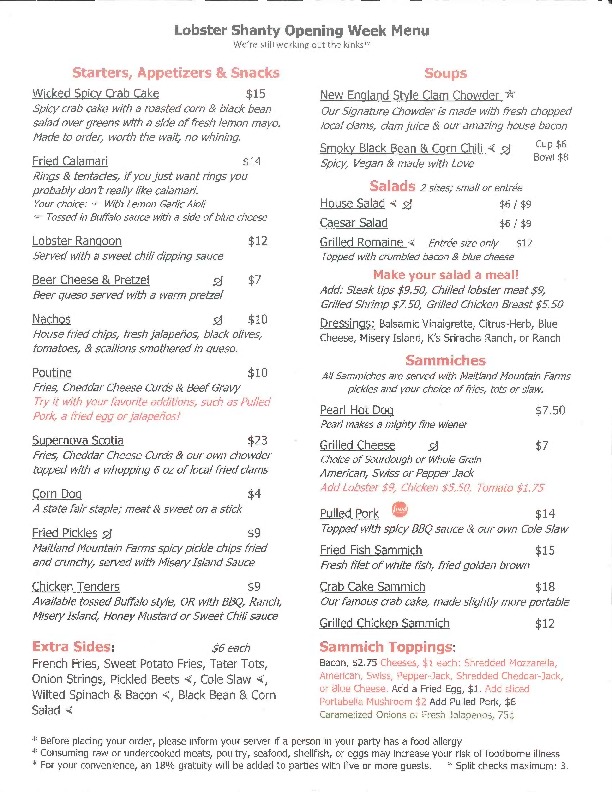 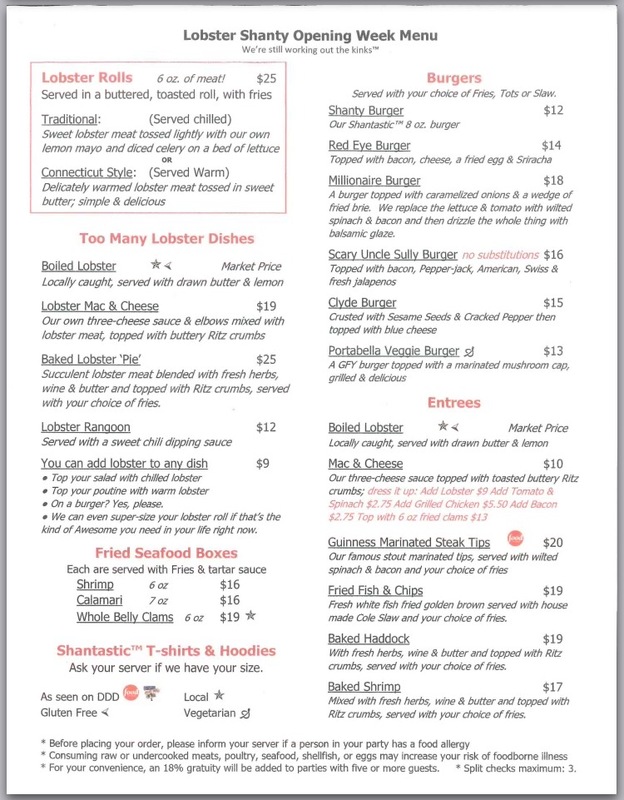 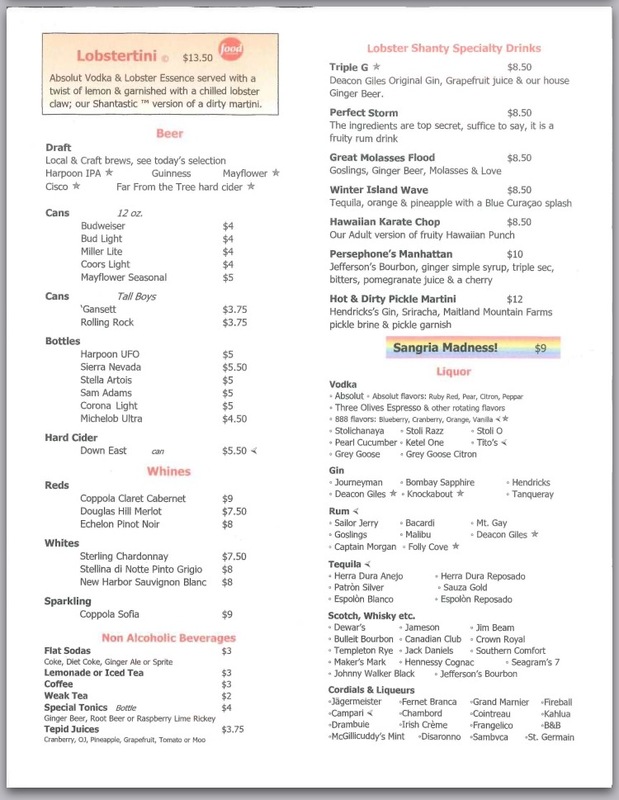 The Menu is set up like how someone would order a meal or how much of a serving they would want to eat. On the very front page, we have the "Starters, Appetizers & Snacks", "Soups", "Salads", "Sammiches", and Sides. Looking at all these categories on the front page suggest a small size dish for your meal. These are also the first items you would order at a restaurant because they are quick to make and get you started for the main dish without filling you up greatly. Each main category is currently colored red and under it is the food items that fall under it with a little bit of description as well as if your able to modify it to more to your liking which is marked in red. Having descriptions under each item gives it some life and more uniqueness to it compared to other places that offer it.

When flipping to your next page your reach the second half of your dinner or meal, the main dish. On the left side of the menu, it lists their many lobster dishes as well as their seafood dishes. While on the right, they list all their burgers and entrees that are being offered. Many of their entree dishes are also seafood or lobster inspired dishes. By putting this all on the second page, one can see everything they can have for their main dish making it easier to decide on what to eat.

Lastly, flipping to the last page will give you the long list of alcoholic drinks they offer. With their infamous Lobsterini blocked off in its own little box giving it more of a certain stage appeal. After being featured on food network shows.

Just recently, in April or March of 2017, Lobster Shanty was shown on TV Diner. TV Diner is a show that goes around to local restaurants in Massachusetts showing were the best places to eat are locals and tourists. TV Diner on NECN is hosted by a Salem Resident, Billy Costa. Billy's show showcased their Wicked Spicy Crab Cake which happens to on the first page and the very first item you read.